After one of many disastrous flights on my East Coast tour, I landed in Rochester nearly three hours after the scheduled arrival time. This leg of the trip was filled with the last bits of sun I would see before returning home to Seattle. I stuck close to home, participating in the family barbecues, playing with the dog and working on some of my Done Is Good list. 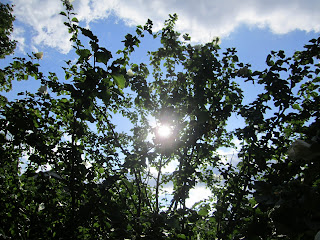 One of the first things that happened was the last in a long line of attempted pie making instruction. My mom is the Queen of Pie Crust, and has been kind enough to instruct me over the years. We collaborated on a blueberry pie, which vanished mysteriously over the course of a few days. 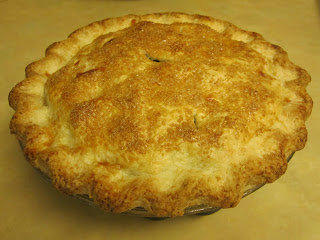 I may have stirred, folded and brushed, but I believe that the secret of the perfect pie crust is an innate quality – double-jointedness in the fingers. My proof is anecdotal, I won’t deny, but everyone I’ve ever met that can create the perfect pie crust has been double-jointed. This characteristic lets the baker manipulate the dough without puncturing it, press the dough into the pie plate without implements, and crimp the crust together to create a tight seal.

I am not double-jointed.

The dog, Kikko, roamed through the garden while we were grilling. He was hopeful, but no piece of chicken escaped long enough to make its way down towards him. 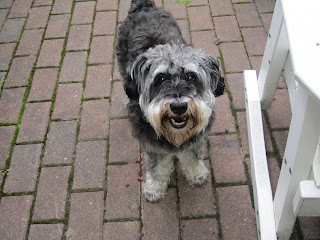 Altogether, it was a quiet visit to Rochester. I did not make it up to the University to visit the lab or my old office, but I did gain a typewriter! Pictures of that to come as soon as I ship it out to San Francisco!