When I made my travel plans, it didn’t occur to me to take into consideration things like natural disasters. I booked a flight into Norfolk, Virginia to visit my grandmother, completely oblivious to the fact that I’d be flying straight into the path of a Category 3 hurricane. What’s a trip without a little adventure?

The flight that was supposed to take me there was an absolute disaster. A mere 20 minute delay out of Rochester combined with some extraordinarily terrible customer service meant that I would not get into Norfolk until noon the following day – a nearly 24 hour delay! I won’t divulge the story of how I got to Norfolk here, but I did manage to pick up my rental car before the end of the day.

Straightaway, we launched into Irene preparations. Styrofoam blocks lined the windows, in case water had the audacity to attempt entry. My grandmother and I planned meals, but we quickly discovered that we had no idea how to cook without a stove, a microwave or a refrigerator. The bathtubs would not retain water, so I pulled a MacGyver and contrived a solution made up of plastic wrap, a weight and some gravity. It seemed ridiculous making hurricane preparations in the sun… 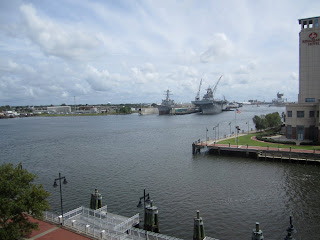 Parts of Portsmouth were already under a mandatory evacuation order, but this apartment building had withstood hurricanes before, so we remained in place. Then the rain started to pour in… 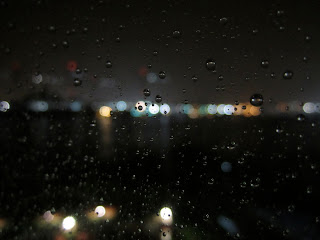 Our area (Olde Towne) was now included in that mandatory evacuation order. Contrary to popular belief, you will not be arrested if you defy such an order, but it does mean that you forfeit your right to any emergency services if you stay. Break a leg? Tough luck, no one’s coming to set it. Despite the fact that I was excited to see the hurricane from such a spectacular vantage point, we relocated to a hotel some few miles away.

We watched the news as Irene downgraded from a Category 3 to a Category 2 and finally to a Category 1 hurricane. I had a worthy gin opponent in my grandmother, and by the time the hurricane had passed through Portsmouth, we had won an even number of games. Once power had been restored to her complex, we packed up and returned.

The next day, I went walking around historic Portsmouth to survey the damage. The ferry started running as soon as possible after the waters became safe – it is a main mode of transportation from downtown Portsmouth to Norfolk. 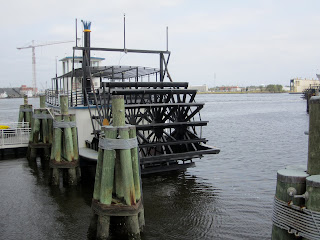 After the last hurricane flooded the historic district, they had built a wall to keep out water. It worked quite well – the streets were dry by Monday. 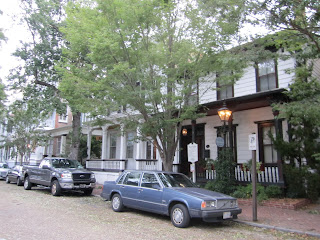 How the flowers survived the high winds, I don’t know, but they seemed none worse for the wear.

By the time I flew out, Portsmouth was running business as usual. My plane took off without incident and I was on my way to Florida!