As I walked into this session led by Francine Gordon (F Gordon Group) and Sabina Nawaz (Sabina Nawaz Consulting), I was a little surprised. Instead of rows of chairs facing the front, it looked like we were about to sit down to an organized lunch.

On the tables were worksheets for attendees to fill out, looking something like this: 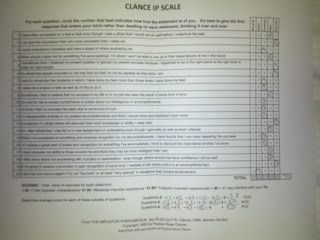 If you’ve filled out any psychological survey, there’s a high probability that you’ve ranked statements like the ones that were on this sheet, including:

As we scrambled for pens and glanced furtively around to make sure we weren’t posing as impostors, the session started. Francine started by asking the attendees whose colleagues think that they (the attendees) are competent. A fair amount of the audience raised their hands. She then told the people who don’t think that they deserve that opinion to lower their hands. The number of hands that remained raised was paltry in number.

When organizing a panel on the impostor syndrome, which is this idea that you are not qualified for or deserving of the job you have even if you are, Francine ran into an interesting problem. The women that she approached to be panelists were hesitant to participate because:

They were afraid that if they were on a panel about impostors, people might think they were impostors.

As we went through the worksheet, we surveyed the results. There were three overall categories (at the bottom of the picture):

Amongst the audience, NGEs were the most common, followed by DOSs, and trailed by PGFs (where I happen to fall).

We then broke up into groups discussing our “classification” and trying to identify what triggered it and what we found that helped us to cope. As a PGF myself, I ascribe to the “fake it till you make it” mentality, which in the realm of public speaking works pretty well. We chatted as a group for a while, followed by some closing remarks.

One of the pure gold quotes from Sabina: “If you don’t buy these ideas, that’s okay, rent them!”