This is the third part of the Julia on Google Compute Engine (GCE) series. The first entry discussed how to set up Julia on a standard GCE instance, and the second walked through working with Google Cloud Storage from within a Julia program. In this entry, we’ll be diving a little deeper into Julia, and talk about parallel processing.

Setting up your instance (reprise)#

This is when your machine type matters a bit more. Now, GCE has basic, multi-core machine types, where the memory scales with the CPU count, but it has high memory, high CPU, and shared-core types as well. You want to pick the type that is most appropriate to your workload. For our experimentation, we’ll assume that you’re using a machine with four cores. To refresh your memory on how to create an instance through the Developers Console or the command line, take a look at the first Julia on GCE installation.

We want a multi-core machine so that we can take advantage of the easy parallel processing capabilities that Julia provides. There’s a more complex version where you can use multiple machines within a project to take care of simultaneous tasks, but that involves configuring networking, which we’ll set aside for now. In this example, each new thread will be farmed out to one of the cores on the virtual machine.

A simple parallel program in Julia#

Before we get into anything terribly complex, let’s start with the basics. There are several functions in Julia that are specific to parallel computing:

Note that the last four are prefaced by the @ symbol, indicating that they aren’t really functions; they are macros!

What’s the simplest possible program that we could write? How about a program that spawns some processes (we have four cores, after all), where each thread generates a number and reports it, along with the its identifier, to the command line? Let’s reduce the problem to one thread:

Easy. We get the id, generate the number, and output it. Now, let’s use some of Julia’s parallel computing-specific functions to farm this program out to multiple cores in a for loop:

If we saved this in a file called parallel.jl, we’d tell Julia that we wanted it to parallelize over four cores by indicating it in the command line:

Once executed, you should see ten lines reporting their numbers, along with which core handled the generation: 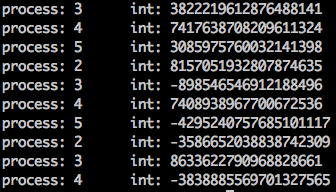 Digging into the source of Julia, you’ll note that r, a RemoteRef, has three properties that you can access:

Try exploring where and whence with a little bit of @spawn inception (make sure you start it by typing julia -p 4 <filename>):

You can see that a’s where is equal to b’s whence, because that’s where b started.

I couldn’t resist – how meta could I make this blog entry? The Julia Set is a type of fractal that falls into the embarrassingly parallel problems category. Now, Martin Rupp already wrote a fantastic entry on constructing Julia Sets in Julia, so this will be based upon his introduction and we’ll tweak a couple things along the way.

We’ll represent our second complex number as z, using the (x,y) values from the pixel in question:

The Julia function, the one used to calculate the value of a pixel, will look like this:

The parameters z and C are as we defined them above, and the max_step parameter dictates how high our values can go.

Now we’ll use this algorithm, in parallel, for every one of our pixels (700,000 of them, to be exact). However, we don’t have 700,000 processors at our disposal, so what we will do is split up the pixel ranges and give those ranges to separate processors to handle. It’s a perfect use for the distributed array! If we construct a distributed array, tell it what function to use and what its dimensions are, it will split up the work for us, using the indicated function:

We don’t yet have the function. Let’s define a function for it, and save it in julia_matrix.jl:

Now, we’re partway there. We’ve got the algorithm to determine the pixel shading, the function to populate a section of the pixel matrix, but we’re missing the glue to pull it together and generate an image. For this, we’ll use a second file called julia_gen.jl:

Once you copy over your resulting julia_set.png image somewhere and take a look at it, it should look something like this: 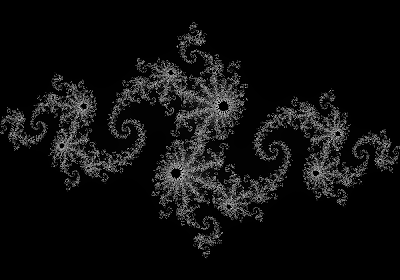 If you change the value of C to:

you’ll get a very different set: 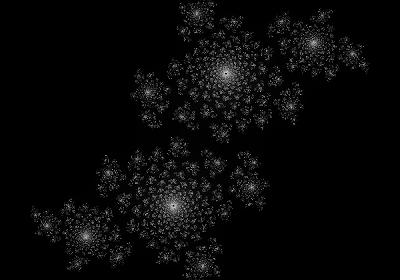 That’s it for parallel programming in Julia! I’ll be taking a little bit of a hiatus before my next entry on this topic.